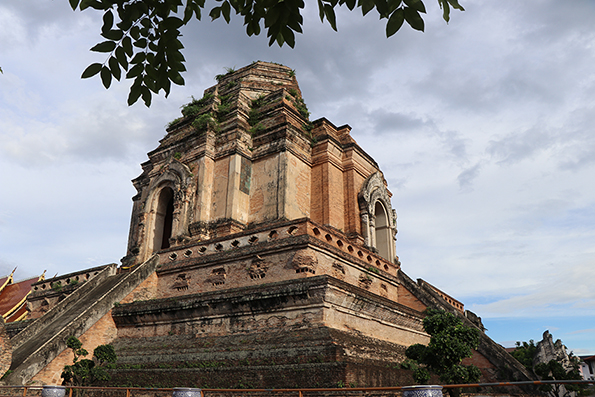 We’ve been on the road for almost two weeks now. It isn’t a very long time, for sure, but it feels like we are now getting into the groove of traveling. We are finding our routines, figuring out how we want to spend our days on the road.

In the mornings, I write. It’s been relatively easy to get going with my morning routine of writing although I’m no fan of writing before I’ve had breakfast and a cup of coffee. However, nothing beats the feel-good after a rewarding writing session.

After I’m done writing, the rest of the day is free for whatever activities we feel like doing. For the most part, we do what tourists do: walk around, say “no thanks!” to tuk-tuk drivers and when the heat of the midday gets unbearable, we step into one of the many 7/11 –shops with the greatest air conditioning, pick an ice cream flavor we haven’t tried before and eat it outside the shop before walking on. We visit temples, try new fruits like mangosteen and sometimes exchange a few words with other backpackers.

A New Perspective on Traveling

However, as we have travel plans into October which means we’ll be on the road for a few months more, the perspective on traveling changes. The days aren’t about wake up as early as possible to see as much as possible like they usually are on short city holidays because we have time. We have days upon days! We’ve been in Thailand for two weeks now and we still have 1,5 week to go before we hop on another plane. That means we can stay a few nights longer in every city we visit and take the time we need to get to know places.

In other words, we are in no hurry. And because we don’t have to count every hour of the day, we really get to see what we want to see.

What made me think of this was an evening a few days ago when we were still in Chiang Mai. We decided to visit one of the many temples of the city, a temple called Wat Chedi Luang. We went to the area, paid 40 Baht as a supporting fee to the temple and started walking around the area.

First we visited one of the viharns, assembly halls, which are usually the golden, colorful, pompous even, buildings – but which I rarely find fascinating. The reason to this is that the viharns are very often built in the 20th century which makes them very new and fresh and I am more for the old buildings and ruins.

Therefore, as visiting the viharn with all the other tourists was a small disappointment, I was beyond excited (I might even say I was momentarily breathless) when I saw the real thing. The Wat Chedi Luang.

Taking In The Quiet, The Calm

It was already in the evening and the sun was about to start setting when we came to the old temple. The ancient layers of stone, the carvings, the details put into the chedi were all beautiful – partly because it was well done, partly because the evening sun gave it a wonderful color and partly because I was awestruck by the fact that this temple was built in the 14th or 15th century.

Many of the tourists who also found their way to the chedi, were happy to just walk around it once, take a photo of it and then leave. We, however, decided to sit down and enjoy the peace and quiet of the temple area – we had the time.

An hour flew by as we sat on the white bench, watching other tourists walk by, take a selfie with the chedi and then leave. We also saw a young man sit down with his sketchpad to draw Wat Chedi Luang (he also took almost an hour to draw the temple), some stray dogs and many of the monks go on about their daily business.

We took in the quiet, the setting sun and the beautiful warm color of the chedi as the sun shined on it. As we sat there, it felt as if I could feel the temple, the serenity of it.

There were so few who took the time to actually sit down and look at the building, to take in every detail of it, I really wonder what they can remember of it. Of course, they have the photo to remind them of the temple – but can they feel it as I do even after days of seeing it? I wonder how many historical buildings, artefacts and paintings I’ve looked at (probably numerous) without really seeing them.

It’s time to change that.

As there is slow-food, there is also slow-traveling. It’s about getting into the groove, about feeling things rather than only looking – it’s almost like mindfulness, finding yourself in the moment of now.

2 thoughts on “The Great Thing About Traveling Slowly”