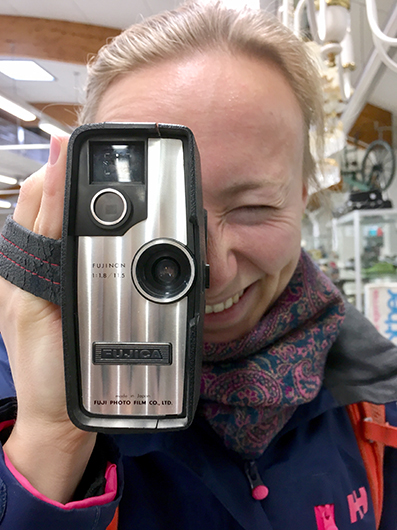 Last Friday after lunch, neither me or my partner felt like staying at home and doing ordinary Friday afternoon activities (which for me would’ve been transcribing thesis interviews from that week). We decided to do something else, something out of the ordinary: visit a flea market.

A few kilometers outside the city center is this huge hall where anyone can rent a booth for a week or longer and sell their possessions. The place is filled with so many odd, fascinating and sentimental objects that have become someone’s trash and are now sitting on those shelves, waiting to turn into someone’s treasure.

So, instead of transcribing and watching videos on Youtube we took my grandparent’s retro car (that still has a cassette tape player) and drove to the flea market.

Walking through the long corridors and observing everything around oneself is quite interesting. The items tell so much about their previous owners – but seeing what people are selling also tells a great deal about the world around us.

The objects that no longer serve the need of their former household tell the tale about trends that once were but aren’t anymore. For instance, a year ago, the flea market booths were filled with Angry Birds brand products and other knickknacks. This year, it is all about the first models of VR headsets meant for private use and tv-series, films and books related to vampires people seem to be ready to let go of.

In a way, flea markets are like very modern museums where the collections are constantly updated. What were people interested in a year ago, two years ago? What were the trends five years ago but that have now had their peak moment and are starting to fade away, becoming a part of the past? And on the other end, what old things are people interested in, what objects are they looking for?

Flea markets show another side of the society that cannot be seen in the shopping malls: instead of always buying something new and shiny, on flea markets it’s all about respect and curiosity for old things; about new value found in second-hand products.

Many people visit flea markets because they are searching for second-hand clothes, decorative items, books to read or spare parts for some project they are working on. However, for us, flea markets have a different meaning.

Searching for Something Odd

As you know, we’ve been moving around a lot for the past three years. This has led to the point where we only own things we use often and buy only the things we really need. Therefore, when we visit a flea market, we aren’t searching for clothes, lamps, stereos or other things sold in those booths. Instead, we are on a specified mission: something we call DVD Roulette.

The idea is simple: we wander around the hall and search for DVDs people are selling. However, our search is restricted by some criteria: 1) we try to find a DVD we haven’t heard about before, 2) that is not a mainstream movie, and 3) that sounds interesting but a bit odd – something we probably wouldn’t choose if we were in the store and would have to pay full price for the movie. As these DVDs tend to cost somewhere between 50 cents and two euros, it doesn’t matter that much if the movie’s good or not. Therefore, the odds for finding a suitable movie are extremely good.

We have played the DVD Roulette twice before. Funny enough, we have never done it in the same flea market or even in the same city twice, and we’ve noticed that the selection varies greatly depending on the city.

The first time we played DVD Roulette was in a small city in a very odd flea market. We ended up picking a pretty lousy movie, a romantic comedy. But already on the second time we had better luck ( this time in a very small town and a very small flea market) and found an interesting sci-fi movie.

The third round was on Friday, and we found a film called Wonder Boys from year 2000. It was almost too mainstream to be chosen as it had famous actors in it, an Oscar-nomination for best screenplay, and the film reviews promised a ”fun, fantastic movie”. But because the flea markets today are mainly filled with mainstream movies (for instance, we found four (4) Devil Wears Prada and probably three sets of the Twilight trilogy), finding a film odd enough has become more challenging. Therefore, Wonder Boys was probably one of the best we could find, and as neither of us had heard about the film before, it felt like a good choice for this round of roulette.

Freeing the World From Objects

You might wonder why we do this sort of activity. Wouldn’t it be easier to just pick a movie online or on Netflix and skip all the searching? Well, let me explain, because there are many reasons why we enjoy the game of DVD Roulette:

First of all, we get to see a film we’ve never seen before and, as I mentioned, probably never would see if not for this activity.

Second, it is great entertainment to both search for the movie and to watch it later.

The third benefit of the game is the feeling we get: when we purchase a DVD someone doesn’t want to own anymore, we both feel like we are liberating the world from yet another semi useless object. This is because one of the rules of the DVD Roulette is that after seeing that movie we throw it away. We don’t keep it, we don’t give it to anyone or put it away into a box of things we tend to sell later. We simply discard the DVD.

Some might think it’s a questionable act, and maybe it is.

But this is how we play the game.

(I recommend you to try it the next time you’re visiting a flea market, and if you do, come back and tell me how you found the experience.)