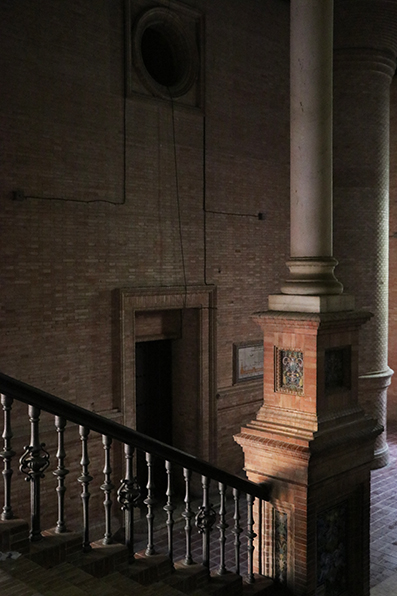 Hotels are like grand theatre productions. You have the life on this side of the curtain, the one visible to the audience, and the other side behind the curtain, where the magic happens. But the magic cannot be seen during the daytime buzz. If you want to see it, you need to opt your timing.

And when is that?

It’s when you wake up at six in the morning to go to the gym for your morning workout or to take a dip in the cold sea, the first rays of sun warming your shivering skin. That is the time when you have the best chance to have a look behind the curtain.

This is what you could see:

In the stairs, you meet a beautiful latino woman who works as a cleaner at the hotel. As she wishes you good morning, you notice her beautiful (she is like a secret talent of the theatre but works as a side character, yet to be discovered).

In the long corridors, you see the cleaning lady, forehead heavy with wrinkles. She’s focused on vacuuming and you do not get her attention (she would be the grumpy caretaker of the theatre, better to watch out for her).

In the reception, two men: one of them has been up all night managing the desk and the other one has come early this morning to take over the shift. Both sip their coffee and chat idly, trying to keep themselves awake (they are two actors from the cast, tired from rehearsals).

And then there is the busybody – a man who seems to be all over the place, organizing the flower setting or straightening up piles of plates and cups that are waiting for the conference guests of the day (he’s the director’s right hand, obviously).

This is something you get to witness at six or seven in the morning. The curtains are still open, the set still somewhat chaotic, the staff running around fixing small details. But when the clock shows eight and most of the hotel room guests wake up to enjoy their breakfast buffet, the curtains close and the magic of it all is left behind the velvet.

The grand show is on.

The cleaners disappear as their shift is over. The tired night receptionist gets to go home for a good morning sleep. The busybody has finished all the tasks that require running around and can take a break, disappearing somewhere behind the curtain.

All the workers seem to improve their posture, build up a friendly smile that never leaves their faces when they work, ready for a new day at the Grand Hotel.

For the guests who make their first appearance of the day at eight, the Hotel is simply like on this side of the curtain – they would never guess the hustle and bustle that happens behind it.

But the early birds who take a morning dip in the sea, a relaxing moment in the sauna or a refreshing walk outside on the grounds – they get to see the production process of the Grand Show: the hustling of making everything seem perfect, the power structures behind the roles, all of the magic.

Most people only come to enjoy the show. But for those who are curious to know how the magic works, what happens behind the curtain… they can see it – if their timing is right.