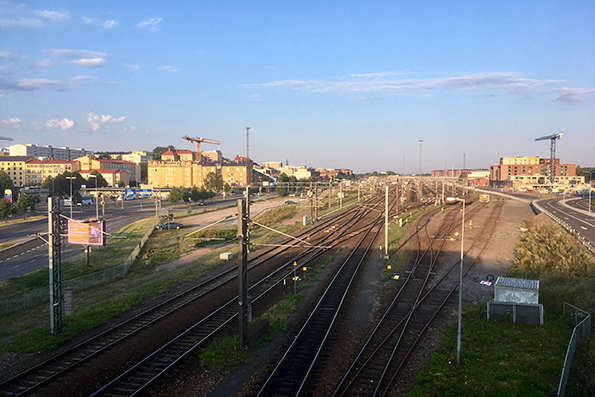 From Monday to Friday at 8.52 AM, she parks her bicycle in front of the red brick building. While locking her bike with a special lock and a wire for double-protection from bike thieves, she hears the announcement for a train departing.

The central railway station is less than a mile away from her work and the departing trains can be seen from her office window. Every morning the announcement comes at the same time, declaring the same thing: a train is leaving to another city and if you wish to take this train then please, go to platform number four.

Every time she hears the announcement, her heart fills with an odd sense of longing. She wants to be on that train, on her way somewhere. She has no idea where the train is going (the announcement becoming foggier the further the sound travels) or how long the journey will take, but still, she wants to take the train.

This longing makes her feel tempted to unlock her bike and take it with her to the train. Pay for the bike and for her own ticket to the unknown, no matter how much it costs or where she and her bike will end up in. Who cares when freedom awaits on the other side?

See, that’s the thing. If she enters the red brick building, now the clock being 8.55 AM, she is giving up another eight hours of that freedom she so wants to have. But how can she make the choice? And is this morning, this moment, the right time to make such a choice? In the flush of a feeling of longing and temptation, can she trust herself and her own judgment?

Should she remind herself that this job gives her financial security, respect at home and among friends? That this is the thing she is supposed to do? She is good at what she does, at paper-pushing and sitting down for a coffee with co-workers every few hours. Could she throw away all the great things she has worked for most of her life?

So, this Friday at 8.57 AM, she leaves her bicycle in front of the red brick building, locked with a special lock and a wire for double-protection, and enters the building. After all, it’s Friday and the weekend is about to start.